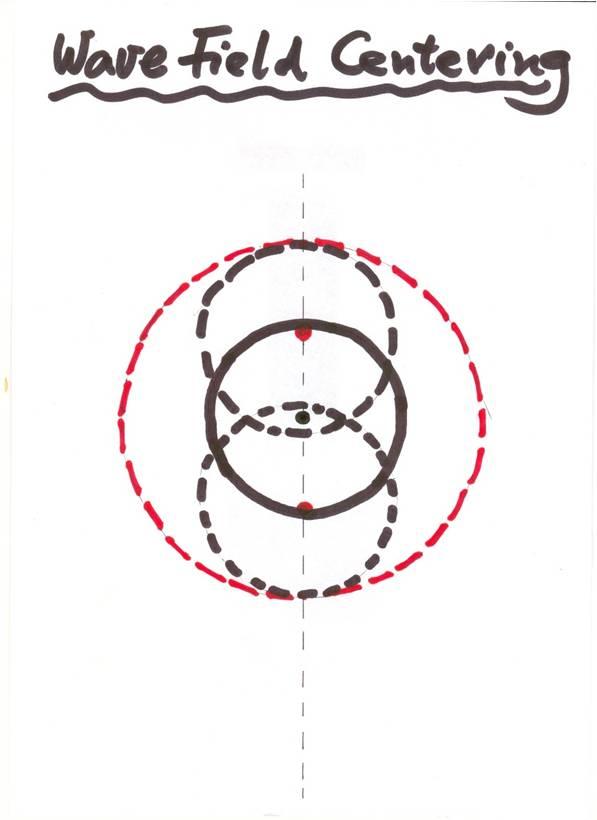 Not one action or motion by man or Nature in the entire universe can escape from the absolute centering of its action by the Controller of all action. Anything, or any man who tries to escape from it, or use his “free will power” to set around it, does so at his own peril. He will not escape, however, from the perpetual control of his universal energy Source. No matter what he does, to upset the universal balance, he will find that the Creator of Creation always centers him, and his own unbalanced orbit remains on center with his unbalance, and is perpetually in a plane of 90 degrees from the shaft upon which it’s circling.

If my thinking is unbalanced by emotional disturbances, or my actions reflect my unbalanced thought-decisions, the tensions which result from such unbalance will cause every Mind-center, which controls the balance of all those thoughts, to act as though they were off-center and the spinning of the electric current around that off-kilter center will be like a fly-wheel with its shaft placed off-kilter. This understanding helps me to know why my body develops toxins which cause my various ills. But, I can never become off-center with my Mind-Source, for the sun’s gravity still controls me by centering a larger circle, which includes my entire wanderings around two centers instead of one. This is the same principle as in the off-center flywheel which will turn with uneasy and uncomfortable oscillations if slow enough, but would shake itself to pieces if turned very fast. This example is a good symbol of our present civilization, which is ever turning faster in its off-kilter orbit, and ever approaching its dissolution.

Every thought and action in this universe is centered by its energy Source, which controls its action and thoughts FROM WITHIN and balances them from WITHOUT by two extensions of that center. These extended poles are the ends of the gravity shafts around which all masses rotate under true circular control.

Every wave field consists of light rings spinning around the Mind center – the center of gravity, in a plane at 90 degree to the gravity shaft.

The quality of a wave field is defined as the degree of its centerness.

Every balanced system in Nature has the cube structure.

Based on my deep understanding of “Centering of Wave Fields”, I succeeded in  balancing water molecules through irradiation with microwave radiation from a Cell Phone that I centered using a balanced thought pattern that I created and applied in order to center the unbalanced microwave radiation of a Cell Phone (see below). So, I know how to create a balanced thought and how to project it into a material reality manifestation.

Second, I have performed measurements which are indisputable experimental proofs that every (human) cell is mind-centered and I’m going to publish the results within the next three months.

Mobile phone producers keep assuring us that there is no scientific proof that the mobile phone technology is hazardous for human beings. The Water Crystal Photography (WCP), developed by Dr. Masaru Emoto (Ref. 1), delivers photos of totally unbalanced crystal structures of waters irradiated by mobile phones, which shows indisputable proof that microwave radiation of mobile phones is catastrophically hazardous for humans and definitively refutes the statements of the mobile phone producers that mobile phone technology is safe. Human cells on average are about 75% water, whereas the cells of the brain contain 85-90% water, and blood cells contain even 95% water. Water drops are cellular when warmed above their freezing point, but below that point they become hexagonal crystals to reflect their positions in their cube wave. In other words, water crystal structure is a reflection of the degree of balance of the wave field by which it is irradiated, or, is the measure of its quality. So, the WCP is the most convenient method for verification of, and delivering of final true proofs regarding the quality of the effects of mobile phone microwave radiation on living bodies.

Human beings are water-based and since the pulsing frequencies of the water molecules and the microwaves of mobile phones are very close, according to the general law of resonance based on the law of action and reaction and according to the universal principle of octave multiplication, the water will warm up. That is the mechanism of body heating by microwaves and that is why we are particularly sensitive to microwaves.

The main problem is that the microwave radiation of current generations of mobile phones is not centered. Is off-center, as a logical consequence of the present state of science and the state of balance of the beings of producers of the mobile phones whose unavoidable final consequence is the eccentric oscillations of both the emitting medium and the outgoing microwave radiation (Refs. 4, 5). If a human’s thinking is unbalanced, and since his actions reflect his unbalanced thought-decisions, the tensions which result from such imbalance – the recordings of the unbalanced thoughts – will cause every Mind-center, which controls the balance of those thought-ring recordings, to act as though they were off-center and the spinning of the electric current around that eccentric center will be like a fly-wheel with its shaft eccentrically placed. In accordance with the general law of resonance, the resulting off-centered microwave radiation of mobile phones in interaction with living cells pulls them out of balance in equal measure of their oscillating frequencies. That is why some parts of living bodies are more influenced by microwave radiation then other parts.

There have been many attempts fat optimization of the influence of the unbalanced microwaves of mobile phones on living cells, either in the form of electronic chips or in the form of different kinds of sticks. Without having data of their certification, any comment about their possible effectiveness is not appropriate.

It is the primary object of this invention to promote a novel method and to provide an optimal apparatus for balancing microwave radiation of mobile phones and consequently for enabling of optimal effects of their influence on living cells. The non centered microwave radiation of mobile phones is caused by unbalanced thoughts and their consequent recordings, whose final effect is an eccentric spinning of the electric current around “eccentric” Mind-centers. For the purpose of elimination of harmful effects of the off-centered microwave radiation, the unbalanced thought recordings are replaced with balanced thought pattern recordings, which are an expression of Mind knowing. A multilayered material structure is used as a carrier in which the balanced thoughts are first recorded and then all together – the multilayered material structure and the recorded balanced thought patterns, named QS101, – is brought to become part of the mobile device itself. Those recordings are mirror images created with mirrors erected in planes of 90 degrees to the direction of polarity, or to the gravity shaft, retaining in this way the same direction of spin of the electric current. From that moment on, because of the fact that all is interconnected at every moment of time in this electric universe of motion, both the mobile phone and its microwave radiation become balanced as a result of the recorded balanced thought patterns which cause every Mind-center, which controls the balance of those thought patterns, act as centered and consequently the spinning of the electric current around the Mind centers become the true circles (Ref. 6). Both the method of replacement and the elements of the multilayer structure are adequately chosen in order to be compatible with a way of Mind knowing expression so that there are absolute efficient and permanent actions of Mind-centers in accordance with the recorded balanced thought patterns provided. As a final result the balanced outgoing microwave radiation of the mobile phone, in accordance with the general law of resonance, causes all living cells irradiated by those microwaves to get into balance, which is proven by the hexagonal crystal structure of their water constituent.

As it turns out, the QS101 in the form of a holographic sticker satisfies all of the above demands and can be brought in union with a mobile phone itself by simply pasting (on the inside surface of the battery cover or on the battery itself – recomended for the sake of mechanical damage prevention during use of a mobile phone).

The test procedure of the final product QS101 has been carried out in the three following steps:

The method developed, with small consequent adjustments, is applicable to all sources of microwave radiation. The great advantage of the QS101 is the fact  that it contains just components that could go out of functionality only by mechanical demages, so there are no service costs and there is an unlimited guarantee period.