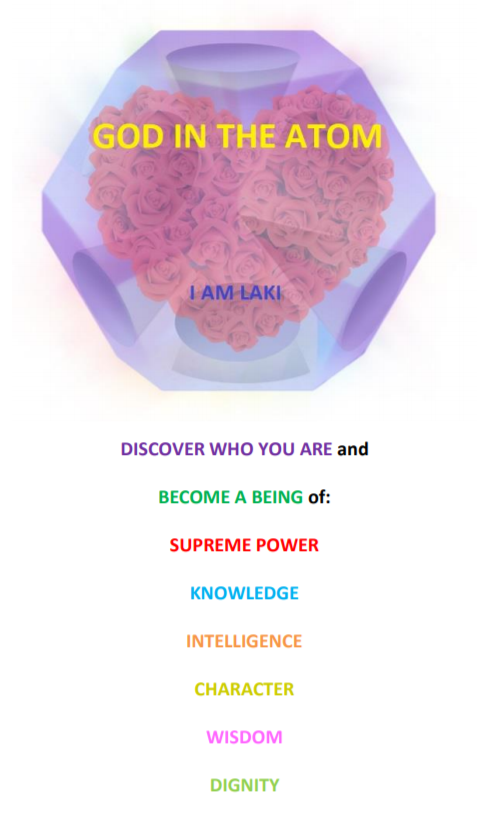 My book GOD IN ATOM is offering you irrefutable proofs and answers to the fundamental questions of your existence:

“What is my purpose?” “What can I do to be a part of this larger game?” “Am I really a game changer?”

When you have thus become the Universal One Being, you are then the ecstatic IMAGINER – the cosmic dreamer of dreams – the imaginer of IDEA and the creator of imagined-bodies for imagined-IDEA.

This book gives you unbreakable guidelines for HOW TO DISCOVER WHO YOU REALLY ARE – GOD, ALSO – AND HOW TO BECOME A BEING OF SUPREME POWER, KNOWLEDGE, INTELLIGENCE, WISDOM, DIGNITY AND CHARACTER.

This book also reveals to you the secrets of how to get answers and guidance from within in order to live happy and abundant life by realizing that you are God in action. Our world needs in this current age your Love and your perception clearly manifest.  This is precisely that which will heal the world: clear and undistorted perception, flowing through you, nothing self-reflective in egoistic sense, but self-reflective in the sense of knowing the God within.

The self to reflect on is the self that you truly are – the Creator, the Eternal ONE, the spirit of God.  You reflect on those aspects of the Great Spirit that manifest before you as the men, the women, the children, the plants, the animals, the crystals, the other minerals, the creatures of the world ENTRUSTED TO YOUR CARE!  First and foremost you are a steward of your immediate world.  You care for the earth, not in some nebulous way, but directly as an individual representative of God.  You take responsibility for bringing Love and understanding into every environment through which you pass – that you strive to leave in balance and harmony as you pass through.

The entire biological history of our planet has been but a shadow cast on matter by our approach, so to speak.  It is the way that rocks and water and air have begun to respond to our presence, for we represent Life itself.  We are that which lies beyond all duality, beyond all materializing tendencies, beyond all restraints of time and space.  Our consciousness is both infinite andeternal.  It can dwell in the limitations of matter and perceive through whatever filtering systems we so choose, but in healthy function, it is not bound or limited by those systems.  Rather, it uses them as instruments of perception, exploration and adventure.

Outside of time and space, we are one with the Creator, the All that Is, the Source.  But when our consciousness moves within the context of a manifest universe, we become the Son, the Christ.  In essence, we are the relationship between Spirit and Matter, the mediator, the bridge, the means through which the Creator relates to Creation.  We are Life as it relates to planet
Earth, eternity as it relates to time, the infinite as it relates to the finite.  Though we presently experience ourselves as a separate and fragmented species, we are in fact a single unified being, sharing the full consciousness of the Creator.  We are brought into a living, focused expression when we are inside of Creation by the manner in which time and space, matter and energy, sea and stone, react to our presence.

You are living in the shadow of an event not yet taken place. Yet it is you, yourself, under all your layers of false identity that cause this event as you approach ever nearer to the Earth. From within the context of history, it appears that there has been, on this planet, a progression of increasingly complex life-forms evolving toward ever higher levels of consciousness. It appears

that there has been an evolutionary process. But this is not the case. What is actually occurring is that the matter of Earth is falling under the influence of our vibrational body. This influence naturally increases as we draw nearer. Only when the center of our spirit touches the center of the Earth will Life on this planet be fully manifest in form. The same Truth can be presented,
however, that it HAS ALREADY OCCURRED LONG PRIOR TO THIS MOMENT AS WE PERCEIVE IT AND WE ARE BUT A REENACTMENT OF THAT WHICH HAS COME BEFORE.

Your real life will begin when the Creator gives you His definition in form. Within the womb of history, our species has been primarily defined by the Earth-Mother who is helping to prepare the clay. She is only interested in getting the form arranged according to specification. Her only knowledge of Spirit is that it brings forth her potential.

When the Father’s center merges with the center of the Earth, the collectivity of human consciousness will awaken to a unified field identity. You will be born. After that, the influence of Matter will not affect your consciousness as dominantly as it did during the historical gestation period. The Earth will continue to suckle the species, so to speak, for another millennium before you are capable of going off on your own, but even during that period the Father’s influence will be much greater than it is today.

In a very real sense, you have not yet been born. You are still in an embryonic state. You have yet to receive the touch of God’s total definition. Through the long years of human history on Earth, our species has been forming the cells that are to comprise the directive aspect of the physical body of the Creator within Creation. Gestation upon this planet has but set the stage for the emergence of the Planetary Being now taking definite form. This Planetary Being is actually “who you are”.